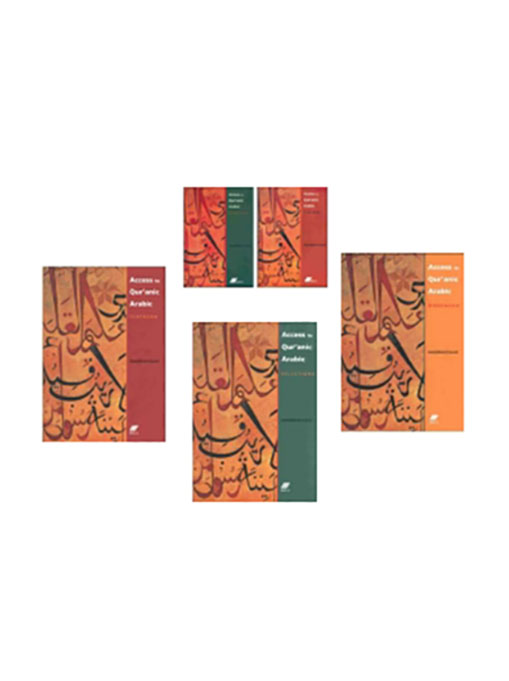 This course consists of the following material below:

Four CDs (in tracks) for Textbook and Selections

The Access to Qur’anic Arabic course is for those who can read and write the Arabic script.

From this course, you will be able to:

The course is based on word frequency in the Qur’an. All words, phrases, and sentence structures used are from the Qur’an.

The Textbook has 40 Units each with 15 lines of Qur’anic text which are recorded on 2 CDs. On the CDs each Unit is on a separate track.

The Workbook has two pages of stimulating exercises for each Unit of the Textbook.

Users are taught to use unvowelled Arabic script from Unit 4 – a step towards the use of Arabic as it appears in books and newspapers.

The Selections from the Qur’an contain words that occur frequently and illustrate points of Arabic grammar and structure. Parallel translation, new vocabulary and notes in English are also given in an easy to follow format.

Each of the 110 Selections is recorded on 2 CDs. On the CDs, each Selection is on a separate track.

The Access to Qur’anic Arabic course should be a useful starting point for a more detailed study of the Qur’an and of Arabic in general.  It is hoped that this course will encourage us to a greater understanding of the Qur’an, the better to appreciate it, follow it, and be inspired by it throughout our lives.

There are no reviews yet.