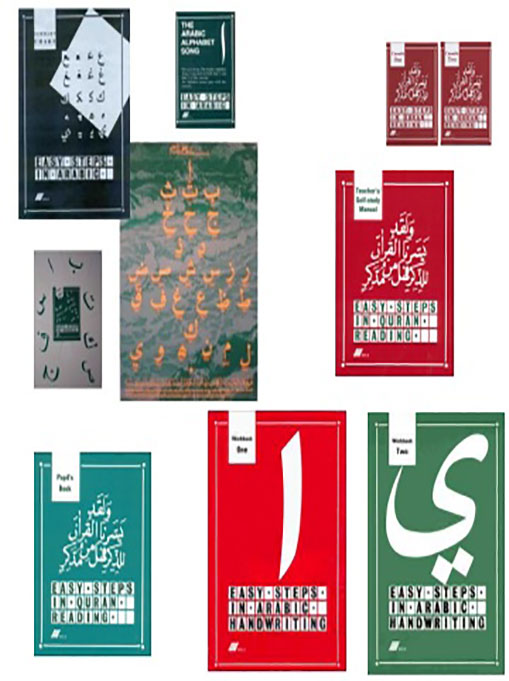 Learn to read Qur’an with a Complete Set of Easy Steps in Qur’an Reading and Arabic Handwriting Course.

A set of books, handwriting workbooks and audiovisual aids for teaching/learning the reading of the Arabic script, rules of Qur’anic recitation and Arabic handwriting.

This course consists of the following material below:

The course is made up of ten items.

2. Reading Books and CD’s. These include a Teacher/Self-study Manual which covers the elements of reading the Arabic script and reading the Qur’an with explanations in English. Each page and each line of Arabic text is numbered. This makes it easy for class teaching. A Pupils’ Book has the same Arabic text as the Teacher’s/Self-Study Manual but not the English explanations.

THE SCRIPT USED IN THESE BOOKS IS THE MAJIDI SCRIPT WHICH IS COMMON IN THE SUBCONTINENT AND ELSEWHERE.

3. Two CD’s have the full recording of the Arabic text of Teacher’s/Self Study Manual and the Pupil’s book.

4. Two Arabic Handwriting workbooks with carefully graded sequences, diagrams and exercises. Writing reinforces reading and is a necessary skill for the further study of Arabic as a language.

5. There is also a 4-page Summary Chart which gives all the Arabic letters in their various forms with examples of words from the Qur’an. This is useful for ready reference and revision.

1 review for How to Learn Arabic: Easy Steps in Quran Reading & Arabic Handwriting Course with CDs